The contents of this page are copyrighted. Re-using them without permission of the author is strictly forbidden!

Daede is the language spoken by the folk of Fae, and in fact it is an ancient language, there have been plenty of translations originating from Iceland, Ireland and Norway to help with interracial communications.

Translators and Decrypters worked for centuries decrypting this language to a level of understanding that the basic meaning of the message can be gathered. However is this a very well developed tongue and of a difficult grammar.

Fae amongst each other de facto are speaking in Daede but do not write. When writing, they most likely use Icelandic .

In Daede there is no typical alphabet as we are used to it. In fact it also is a written language, there is no such thing as letters. Due to the fact that the Egyptians were taught to read and to write by Njal Finn Vollan it is assumed that Egyptian Arabic is based on Daede. Concerning to this fact, Daede is supposed to use signs instead of letters. 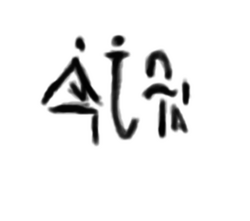 Ancient documents of Fae found in various places on Earth are decrypted. The sign above is saying From Fire We Rise.

As aforementioned, the language is spoken but barely used to document events or theories in a written manner. Although on many places on Earth signs like the one above were found and are found until now.

Why those writings are engraved or painted upon varying objects on earthly ground is still a mystery.

Daedic is spoken slowly and articulate, it is a language with "rough edges" and in it's sound it also comes close to Classical Arabic or Semitic. There also are plenty of dialects in Daede, depending if one is of royal line or not, if they come from the South or the North of Fae and which family they belong to. Each of these have their own, specific way of pronunciation.

Another earthly language assumed to be based upon Daede is Cheyenne .

Retrieved from "https://btm.fandom.com/wiki/Daede?oldid=5416"
Community content is available under CC-BY-SA unless otherwise noted.